Working with Guria was a lasting experience. In the Indian judiciary system the small organization persists to be a thorn of justice in the eyes of corrupt policemen, corrupt politicians and human traffickers.

Guria investigated and eventually closed down a brothel that was operated right next to a children center.

As soon as the doors of the Bombardier machine opened, the temperature in the cabin rose. Having spent the past four weeks in mellow mountain climate, the heat on the roll field in Varanasi was stifling. We collected our luggage and followed the green “EXIT” signs. Most people at the airport were tourists from abroad, you could pick up bits and pieces of Italian, French and the profuse American accent. At the exit Tom booked an OLA Cab on his smartphone saving us the haggle for a fair price. The driver was chatty, telling us his life story including proudly presenting pictures of his wedding and first daughter. Then the topic shifted to tourist attractions: Varanasi is one of the oldest cities in human history, it is a holy place for Hindus and the birthplace of Buddhism. Yoga and Meditation are taught in school, many tourists come here to find inner peace (and export it to millennials living in capitals around the world). We learned that drug consumption is widespread in Varanasi, you can walk through the old town and have a green Lassi (or “Bangh”), a Yoghurt drink that gets you high. Originally, spirituals mixed the already popular Lassis with Cannabis to reach higher levels of consciousness. Nowadays deceitful street sellers mix it with cheap chemicals instead to get tourists high (and intoxicated). And then our driver said this:

He said it like it’s his daily offer to tourists he picks up from the airport. It was shocking to hear child prostitution being promoted to blatantly. Is it an open secret? Do tourists respond to that offer? And why are the authorities not doing anything against it? We started to grasp how big of a problem the organization is fighting, that we were about to reach.

Back in 1988 a man of the age of 17 adopted three children from the red-light district of Varanasi. Ajeet Singh is fighting sex trafficking for over 30 years now. In 1991 he institutionalized his efforts and founded the Nonprofit-Organisation Guria Swayam Sevi Sansthan. Ajeet, a humble but energetic man, melted together with Guria, his effort to fight injustice became his lifework. And the track record is impressive: Guria rescued over 2000 persons from slavery including commercial sexual exploitation and bonded labour. Guria filed 15 Public Interest Litigations in the Supreme Court, the highest judicative institution in India, changing judgements for the benefit of victims of sex trafficking nationwide. Guria raises awareness among 40.000 woman in rural areas where human traffickers strike mostly. The list goes on and on and can be seen here. 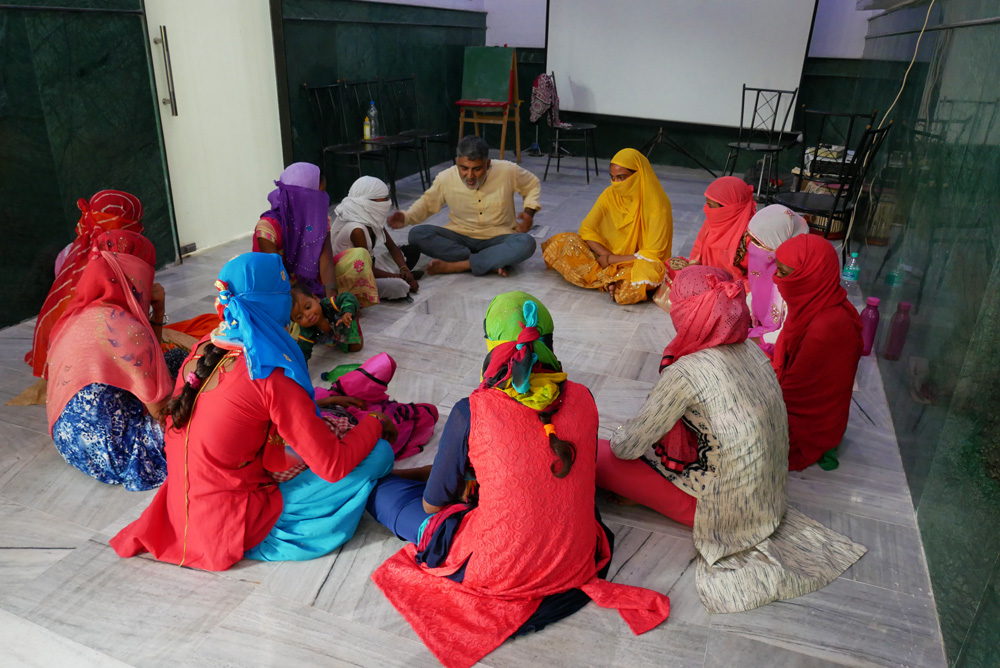 Ajeet Singh meeting with survivors of sex trafficking to encourage them to fight the criminals in court.

When we arrived at the office we were welcomed by Manju, Ajeets wife. She invited us for a cup of tea to the office and started telling us more about Guria and the different projects. “Holistic” is a buzzword in the third sector, but Guria really incorporates this ambition. Prevention work is done in rural areas, rescue operations are carefully planned and executed to free minor girls and shut down brothels. Guria operates a center right in the red-light district where children have the freedom to develop their personality through art and vocational training. The center is a thoughtfully designed place that lets children experience and appreciate the true value of life.

On the next day Ajeet came back and surprised us with a very clear idea of what we can do for Guria. At previous cooperations we played a mixed role of consultants and media producers and suggested how the online presence can be improved – our suggestions resonated so we realized them. Ajeet on the other hand didn’t care too much about the website, he needed us to do something bigger: Digitize Guria! To be more precise: Digitize the document management of all the cases Guria fought in the past and is currently fighting in various courts in India. The system needs to be fed by lawyers nationwide through their smartphone and the Guria office must be able to grant and withdraw access to different files for different lawyers. Uff!

The need for such a system is huge. At the time, thousands of pages of case documents need to be carried around in paper. Especially the large distances in India cause problems: Often lawyers are forced to ride the train for several days because the weight of the documents doesn’t meet most airlines’ luggage requirements. It takes days to duplicate large files, not to mention the costs for ink, paper and printer maintenance. And lastly, storing is a challenge with insects eating their way through piles of paper and the threat of heavy rains flushing the floor of the office. 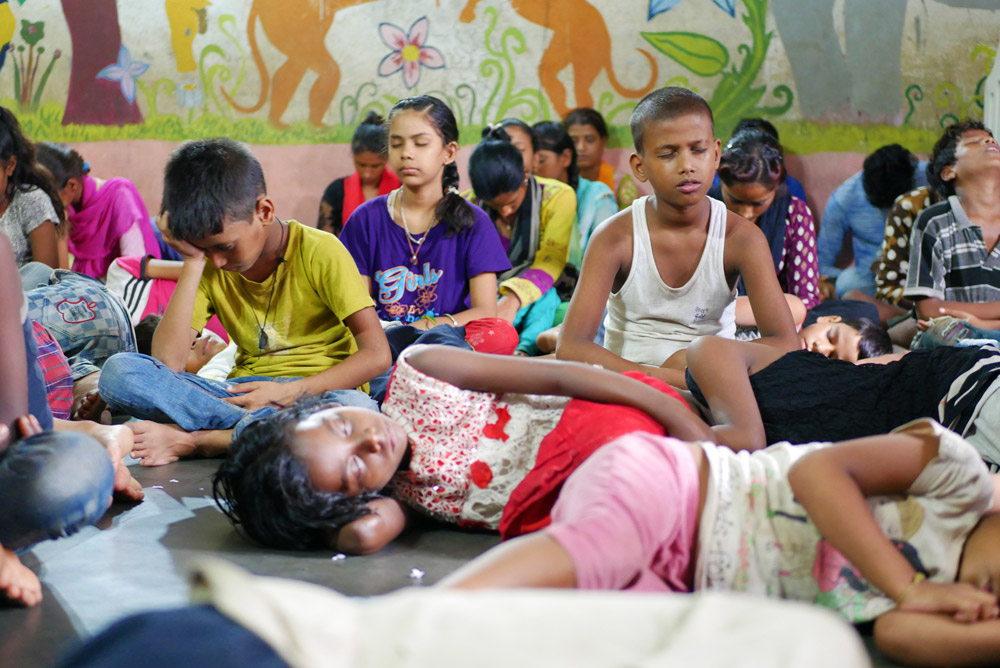 Domenic and Johannes spent the night quite comfortably sharing a bed, Tom slept on the floor after a dramatic loss in Rock-Paper-Scissors (he particularly regretted his foolish early game Rock after a rat was spotted in the room a few weeks later). We got up early to start the research knowing about Ajeets very non-indian drive to get things done as quickly as possible. After a plate of indian müsli (chickpeas with fried onion, garlic, chilies, ginger and a drop of lemon juice) we were happy to find out that a variety of Software-as-a-Service companies offer solutions to digitize court documents. Although most of them were covering the key functionalities needed for Guria, none was offering a complete package; and they were quite expensive. We then stumbled upon the Zoho Creator, a cloud-based service that lets you build your own databases with customizable forms, reports and dashboards. The high customizability and 15% discount for Nonprofits on the already competitive price made our decision easy: we will build the system with the Zoho Creator. 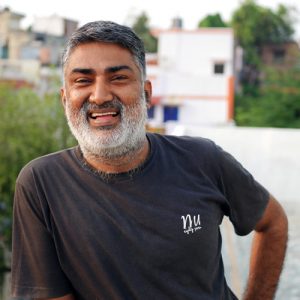 Ajeet, the founder and director of Guria India.

The 15-day trial account was our entry to the world of databases. Tom started to watch manual videos about the Zoho Creator to understand the user interface of the backend. Domenic reworked the Excel sheet Guria was “maintaining” to have it ready to be uploaded without causing hundreds of inconsistent data points. And Johannes could convince Ajeet to at least do the due diligence of online communication and analyzed the Guria website for possible improvements and then started to edit a video for the landing page. The days started to fly by, we designed a part of the database, set down with the lawyers to discuss changes and got back to the laptops to incorporate them. Next to technical issues we needed to find a good way to convince the staff that such a system is a big benefit for everyone. Domenic knew the challenges that can come up with introducing a new system to a team because during his time at the German partner of the UNHCR they incorporated a new donor management system. The trial-and-error process went on for more than three weeks and Tom lost a significant amount of hair describing technical issues to the Zoho tech-support. Johannes joined the efforts after finishing the editing and wrote a handful of detailed manuals to explain the different functionalities different users have access to.

Eventually, we did it!

Now, after four weeks of nonstop working on the system, we are very happy (and proud) with the result. At the beginning we thought we will help Guria with a document that describes the software solution as a basis for negotiating with a software company. And now the system does exactly what it’s supposed to do and a bit more. Additionally, to the document management each lawyer has an individual calendar that sends reminders via mail and push-notification when the next trial is coming up.

A key learning from the previous cooperations was that teaching the staff takes longer than expected. Knowing that we chose to work closely with the staff during the developing process so each of the members already had a good understanding how the system works when we started the final workshops. We are confident the system will be a huge benefit for Guria and are proud to have contributed something sustainable and substantial to the unique work Guria is doing. We humbly hope that we could contribute a little brick to the fortress of justice Guria is striving to erect in the swamp of corruption and concealment that is such a fertile ground for sex trafficking.