One of the organisations we were most excited to meet on our fact finding mission in Manila was Young Focus. They are located in Tondo, with the biggest informal settlement close-by and the reputation of being dangerous.

Our Uber dropped us off just in front of Young Focus’ office, a building located in the residential area just a stone throw away from the bridge that leads to the informal settlements. Inside we were welcomed by Ann and Paul, a british-dutch couple running the organisation. After exchanging ideas on our work, Paul took us out on a tour to visit the projects Young Focus runs within the informal settlement.In the midday heat we set off and began our tour through Tondo. 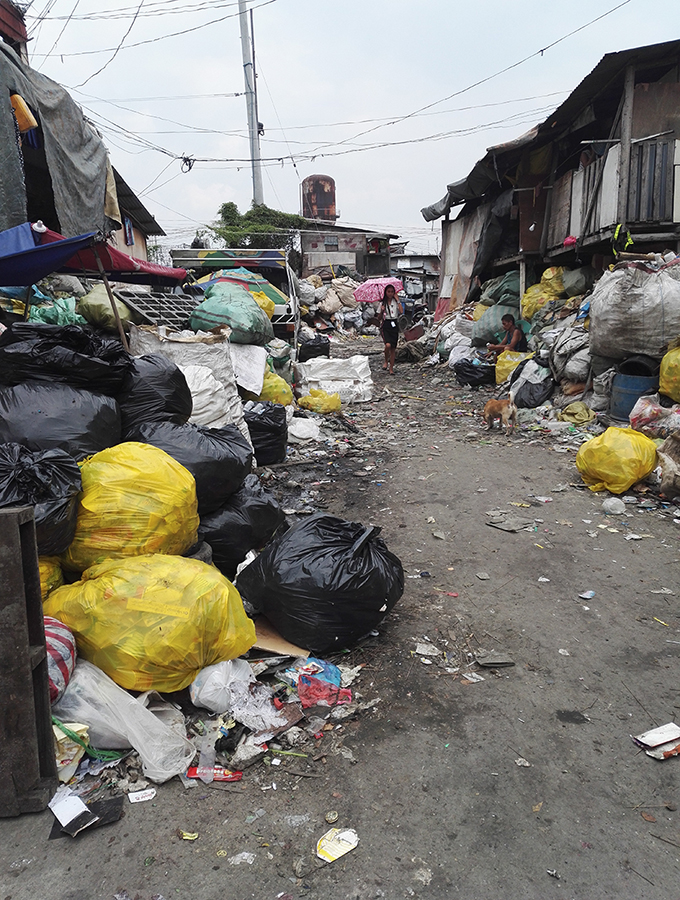 The roads in the informal settlement are filled with garbage. Some of it will be recycled to provide the families with a small income.

Paul prepared us that there had recently been a fire in the settlement destroying the houses of hundreds of families. Our first stop was a basketball court where the victims of the fire had found shelter. A few bags of clothes were the only things they were able to rescue from the flames. Although there was a roof and shade the heat was unbearable for us. The reaction of the people and the way Paul interacted with the people spoke for itself. Everyone knew that it was Young Focus not only providing them a place to sleep but three meals a day.

A mountain of rubbish

Our second stop was one of the schools that Young Focus runs for the kids from the settlement. The building was modern and the teachers were smiling like all people we had met that day. From the top of the building Paul pointed out the ‘smokey mountain’, a mountain of rubbish in the middle of the capital of the Philippines, that is known throughout the country. Although it was officially closed 20 years ago, 40.000 people still live in the ‘Smokey Mountain Area’ in temporary housing. The people have no access to proper sanitation facilities and rely on scavenging and recycling garbage for a living.

The fire left a pile of stones

We crossed a six lane raod and walked into the informal settlement. The roads were very narrow and houses made of wood, pieces of metal and plastic sheets. Most houses seemed barely wide enough to fit a bed inside. After a short work through the dark and narrow walkways past many excited people waving and greeting us we reached the area that had burnt down. We faced a pile of stones scattered over the area of multiple basketball courts. Some people were still carrying away stones, others had already started rebuilding. Paul explained to us that the fire engines had to watch the flames burn down the houses as they were not able to fit their trucks through the narrow roads. 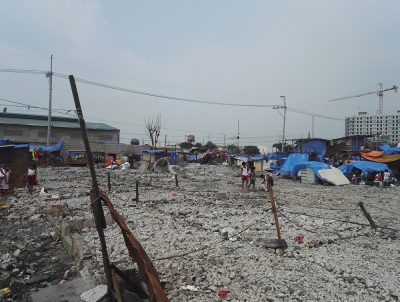 The children collect material that can be used to rebuild their homes. Most of the children walk bare feet on the debris.

Paul speaks the local language Tagalog he was able to talk to the people rebuilding their houses. The government had promised to provide building material for the homeless victims, but the date of the delivery is still uncertain. On our way back to the Young Focus Office Paul pointed out several billboards with a diagonal of at least 5 meters. These used to be adverts for cheap liquor. Now Young Focus has put up posters showing individuals who have managed to escape poverty and give hope and perspective to those who are still living of rubbish.

Young Focus works with the poorest of the poor. With the main focus being education they run schools and give out sponsorships to those who can not afford school fees, books and uniforms. Over the years Young focus has developed further programs tailored to the need of the people in the smokey mountain area. The programs range from infant care to educating parents. The staff also support school drop outs trying to get them back into school and run a youth center for young adults in trying to prevent them from drug abuse. With 65 staff members and thousands of kids benefiting from this organisation, Young focus makes a huge difference to the lives of the people in the smokey mountain area.

This video will help you give you more impressions of the day we spent with Young Focus. Make sure you also follow us on Instagram to see some pictures from our trips to Tondo! We thank Ann and Paul for taking the time to show us their project and are really excited to see, if we can work out a cooperation in the next few months. If you would like to support their great work with a donation, follow this link.

You have questions? Send us a message using our Contact form or e-Mail 🙂